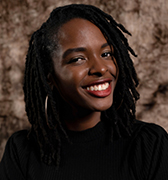 Naomi Henry is a graduate of Messiah College where she received her Bachelor’s degree in music with a concentration in piano. During her time at Messiah College Naomi was the winner of the prestigious department-wide Kuhlman Competition.

Naomi is a classically trained pianist who has been playing the piano since she was 7 years old and attended Settlement Music school as a teenager before going on to college.  She has performed repertoire such as Beethoven’s Waldstein Sonata, Ravel Sonatine, and many Mozart Sonatas. Naomi has been a pianist at churches in the Philadelphia area since 2017, including Crossroads Community Church and Christ Community Church where she is currently attending.

Naomi performs in the Philadelphia area with an all-female neo-soul band called Black Canvas.  She is versed in a variety of genres including classical, popular, musical theatre, jazz, and R&B.

As a teacher, Naomi has a goal oriented style that is creative and person-centered. She believed that the joy of music can never be left out of her lessons. She strives to make sure that her students are enjoying music as they also achieve their technical goals.